Country music's biggest night belongs to the Band Perry! Lead singer Kimberly Perry is the big winner at the 45th annual Country Music Association Awards, taking home three trophies. She shares with brothers Reid and Neil two of those honors, New Artist and Single of the Year, while the blond beauty is the solo winner for Song of the Year, having written the band's breakthrough hit, 'If I Die Young,' by herself.

"The CMAs are the Super Bowl in the Band Perry household, so we feel like we're walking away with Super Bowl rings tonight," Kimberly told reporters backstage. "It's just great to be a part of the country music family tonight."

"I believe this song would've been written with or without me. It was a song meant to be here," said a beaming Kimberly upon accepting Song of the Year honors. "I'm just excited to have had a pen and paper in hand when this song came to earth." 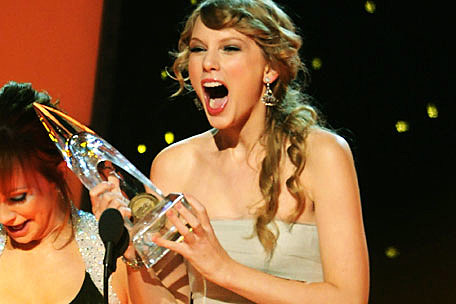 Taylor Swift stakes claim to the night's top honor, CMA Entertainer of the Year. "Thanks to all the fans who filled up the stadiums all over the world this year," the clearly astonished singer said from the stage, going on to also thank every guest artist who has joined her for surprise duets on her Speak Now world tour, reading names ranging from Tim McGraw and Kenny Chesney to Usher and Justin Bieber off her hand. "You have made my year!"

Right behind the Band Perry in number of 2011 CMA trophies is another first-time winner, Jason Aldean. The Georgia native took home Music Event of the Year with Kelly Clarkson for their smash duet, 'Don't You Wanna Stay.' His multi-platinum selling 'My Kinda Party' album was named Album of the Year, in what was arguably the toughest category of the night.

"What a year!" said a visibly moved Jason from the stage. He went on to thank his wife and daughters "for putting up with my schedule" and his longtime producer, Michael Knox, for plucking him from an Atlanta club and bringing him to Nashville 13 years ago to fulfill his dreams. 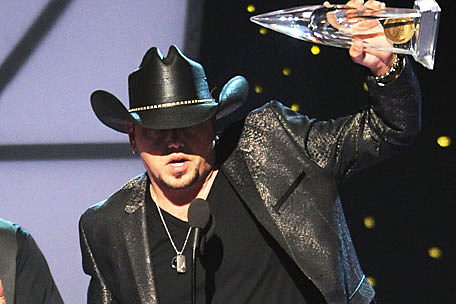 Sugarland have their fifth win in a row in the Vocal Duo of the Year category, and Lady Antebellum are the CMA Vocal Group winners for the third year in a row. Blake Shelton has his second consecutive Male Vocalist of the Year trophy, and wife Miranda Lambert has her second Female Vocalist win. See a full list of 2011 CMA Awards winners and nominees below, with the winners in *bold.

Album of the Year
(Award goes to artist and producer)

'All About Tonight'
Blake Shelton
Produced by Scott Hendricks

'This Is Country Music'
Brad Paisley
Produced by Frank Rogers

Single of the Year
(Award goes to artist and producer)

Song of the Year
(Award goes to songwriters)

'You and Tequila'
Matraca Berg and Deana Carter

'If I Die Young'
The Band Perry
Directed by David McClister